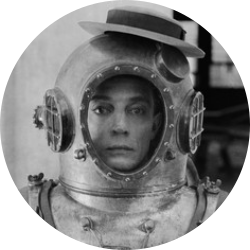 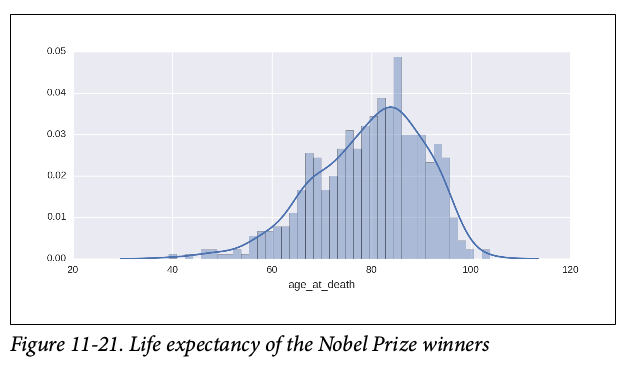 A brief run-down of this chapter in my book Data visualization with Python and JavaScript. This chapter uses Pandas and Matplotlib to drill down into our recently cleaned Nobel dataset, looking for interesting nuggets and narratives.

In the previous chapter, we cleaned the Nobel Prize dataset that we scraped from Wikipedia in. Now it’s time to start exploring our shiny new dataset, looking for interesting patterns, stories to tell, and anything else that could form the basis for an interesting visualization.

First off, let’s try to clear our minds and take a long, hard look at the data to hand to get a broad idea of the visualizations suggested. This is the form of the Nobel dataset, with categorical, temporal, and geographical data:

The data suggests a number of stories we might want to investigate, among them:

These investigative lines form the basis for the coming sections, which will probe the dataset by asking questions of it, such as “How many women other than Marie Curie have won the Nobel Prize for Physics?”, “Which countries have the most prizes per capita rather than absolute?”, and “Is there a historical trend to prizes by nation, a changing of the guard from old (science) world (big European nations) to new (US and upcoming Asians)?”

Introduction To quote the OpenAI Gym page, the challenge consists of: 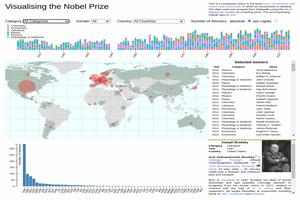 My book Data-visualization with Python and JavaScript uses a freshly scraped, cleaned and refined Nobel-prize dataset to build a JavaScript web visualization...

In order to present their data on discrimination against Asian-Americans in the United States, Dataface Dataface required some bespoke interactive charts, ba...

I recently came across a tweet which mentioned the likelihood that recent Covid vaccine efficacy stats coming out of Israel were an example of a famous stati...